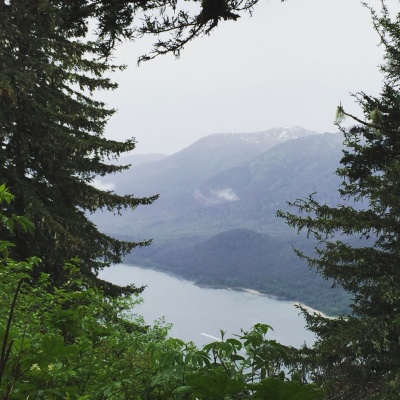 Not knowing how my body would react to the Day of Travel, Scott and I planned for a very mellow first few days in Juneau. On Friday we did breakfast at the hotel, then walked down to the cruise ship docks to catch the Mount Roberts Tram. There were only two ships in port in the morning and they were only just starting to off load passengers for day tripping, so it was pretty mellow. 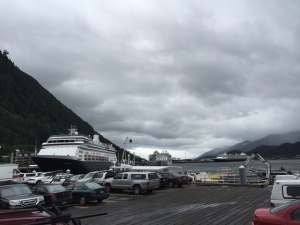 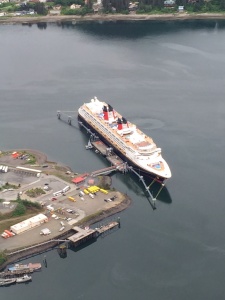 Cruise ships at their docks and one seen from above.

The hardest part for me actually was the fact that all the boats and their attendant vans and buses meant that there was a lot of vehicle exhaust which I am allergic to. With my mask on it wasn’t too bad, but Scott got several lungs full of the stuff plus a burst of fake scents when we passed one of the perfume heavy gift shops. 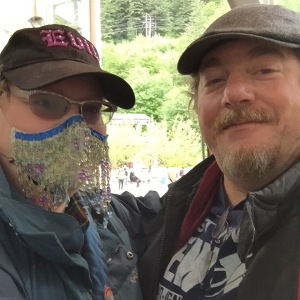 The Mount Roberts tram takes visitors up the side of Mt. Roberts and over the trees of the temperate rain forest. It took me a moment to digest the idea of this chilly damp city having a rain forest, but that combination is part of why they do. Mt. Roberts is part of the Tongass National Forest and is rich in plant and animal life including Douglas Fir and Western Hemlock trees, many of whom were dripping with pale green lichen, and an array of sub-alpine meadow flowers, grasses and ferns. We didn’t see any of the animal life, but we did hear a whole lot of birds. 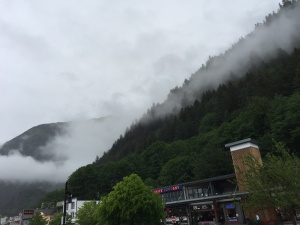 Mount Roberts as seen from the base / Tram statio 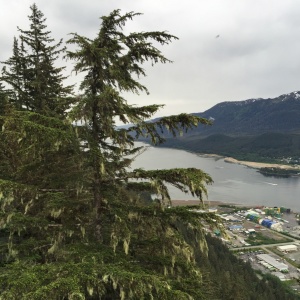 the Gastineau Channel as seen from Mount Roberts / Trees and lichen 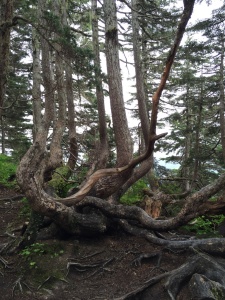 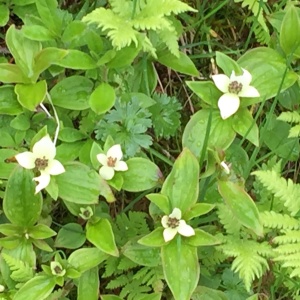 The two trams that carry visitors up the mountain are decorated in traditional Tlingit designs for Raven and Eagle. The images represent the two moieties of the Tlingit and Haida people. “Tlingit people and Haida people are born into their identity through a matrilineal clan system: One’s identity is established through the mother’s clan. All Haida and Tlingit clans are organized into two major moieties: Eagle and Raven. In Tlingit, Yeil is Raven and Ch’aak is Eagle (Wolf is sometimes used interchangeably with Eagle). Each clan is made up of clan houses.” – http://www.ccthita.org/about/history/ 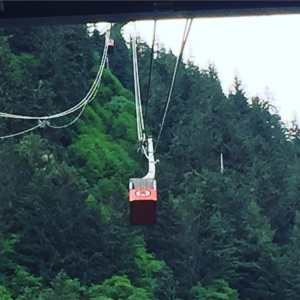 At the top of the run we were let out at the visitors center, which has a restaurant that we didn’t try, and two gift shops with lots of artwork and crafts from local artists, which we did indulge in. There was also this really gorgeous beaded hanging / art piece suspended from the ceiling over one of the main stairwells. Within the beads is an image of a forest (at the bottom edge) and a river with salmon leaping up stream. The work, created in 1998 by Bill Hudson and Clarissa Rizal called “Salmon Return”, was a commission from the Mount Robert’s Tram for the stairwell of their visitor center. “It portrays the yearly return of the Salmon People, shown swimming up a cascading waterfall made of approximately 180,000 glass and crystal beads. The sculpture is approximately 21 feet long, and about 5 feet wide at the bottom.” – Bill Hudson Productions 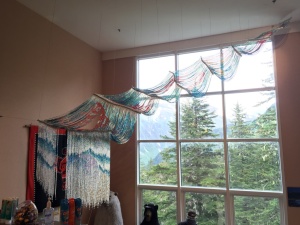 There is also a movie theater that shows the documentary “Seeing Daylight” (Turns out you can purchase a copy of the DVD here )which is about the local Tlingit people, their history, myths, and customs. Its a lovely piece and hit me right in the thinky thoughts so now I have ideas churning in my brain about the similarities in how native cultures personify and interact with the land and Powers, and how there must have been a Norse and Celtic tradition in a similar vein. The artist and anthropologist in me has a whole lot of research to do.

The center also houses a rescued Bald Eagle named Lady Baltimore. She was found shot through the beak and right wrist and either as a result of that, or of the fall after, her left retina tore so she has no depth perception which means she is unable to safely fly or hunt in the wild. She is cared for on the mountain by the Juneau Raptor Center . 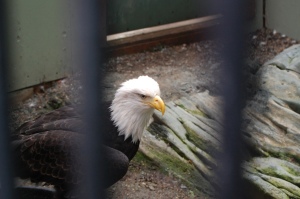 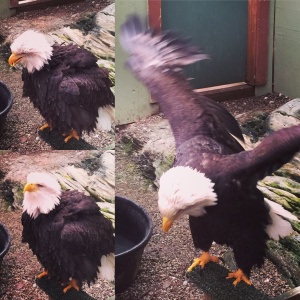 After visiting with Lady Baltimore we walked a little ways up one of the trails to get a sense of the foliage and view from the top – both of which are glorious, and then took the tram back down the mountain.

We grabbed lunch at the docks in another of the local spots then trudge home, wiped out, to take a long lie down.

After our nap, we walked over to the less touristy end of the docks to purchase tickets on a day long fjord and ice burg cruise for Saturday, then walked the couple of blocks up to the Sealaska Heritage Center.

Sealaska Heritage was founded in 1980 by Sealaska after being conceived by clan leaders, traditional scholars and elders at the first Sealaska Elders Conference. During that meeting, the Elders likened Native culture to a blanket. They told the new leaders that their hands were growing weary of holding onto the metaphorical blanket, this “container of wisdom.” They said they were transferring this responsibility to Sealaska, the regional Native corporation serving Southeast Alaska. In response, Sealaska founded Sealaska Heritage to operate cultural and educational programs. The late George Davis (Kichnáalx—Lk’aanaaw) of Angoon spoke these memorable words:

“We don’t want what you did here to only echo in the air, how our grandfathers used to do things… Yes. You have unwrapped it for us. That is why we will open again this container of wisdom left in our care.”

Sealaska Heritage is governed by a Board of Trustees and guided by a Council of Traditional Scholars and a Native Artist Committee. – http://www.sealaskaheritage.org/about

(I didn’t manage to take a photo of the lovely facade of the building, but there is this nice one from the Sealaska Heritage website)

Along with several other shops and galleries, the Center participates in Juneau’s First Friday’s open house. The Center was showing an exhibit of Tlingit art, featuring local artists and a native children’s dance group. We were too early for the kids, but got to see the exhibit and happily fell into the centers gift shop. We also poked our heads into several of the other galleries and shops. One of the more intriguing ones was a shop called Trickster Company which features work by local artists, most of whom are exploring the blend between traditional styles and contemporary ideas and techniques. They have a lot of very cool work. One of my favorites was this one of Light sabers by Rico Worl!

And then it was back to the hotel to fall the frak over.

Sadly the assorted exposures, plus a ton of walking and not enough water caught up with me in the shape of a late night pain flare. No fun, but I survived, which is really what counts.

I am all about the glitter. Glitter is good, glitter is fun, glitter is ridiculous and it can make a terrible day just a little better because who doesn’t like seeing pretty shiny things?

Glitter, in my world, is anything that makes you smile, that gives you that little boost to keep going or slow down and appreciate what you have. Glitter is whatever we need it to be: a sunset, a cat blinking that silly sleepy look at you, a new pair of shoes, a hug, a nap, whatever… it is something that makes a moment just a little easier.

I’m also currently hip deep in some health stuff. It sucks and I’m soooooo ready to be on the other side of it all but I also know I can’t rush the process and that the other side looks like a damn fine explosion of glitter and higher quality of life for me and my family, so its worth it. But wow it sucks today and I’m a in some serious need of glitter

so three Glittery things:
1. my cat playing “marco polo” with me (yes, really)
2. my husband who makes me smile and roll my eyes and is his own form of glitter
3. my awesome Baby Whales Breaching painting from Sarah ‘The Rhino Lady’ Soward that is now watching over my desk!

What’s glittery and shiny in your world today?